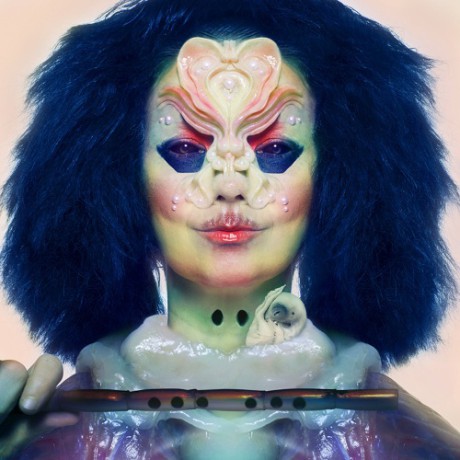 Björk has released her 9th studio album “Utopia”, and it is a return to happier moments for the singer after the venting of emotion that was “Vulnicura”. In fact, it was reported that Björk referred to this as her “paradise”‘ album, and I’ve also heard “Tinder” album mentioned too. Again largely created with Arca (though one track here is co-written by Sarah Hopkins), the overall feel to the sound palette across the album is synthetic yet organic.

“Arisen My Senses” acts as a blissful counterpoint to the last album. It is light, happy and sophisticated and points to a more positive future. “Blissing Me”, the second track and one of the original single releases, is exquisite in its plucked harp sounds alongside floating atmospherics – it really is the sound of clouds passing each other in the sky.

“The Gate” is probably well-known to all here, as it was the track and video that announced Bjork was back again in September. The song, as the video, are both intriguing and hypnotic, from the very first flute-call, to the last fading harmonies. It also rests largely on the vocals of the singer, which show her still in fine voice. The flute is a feature across the album, with a dancing song line provided across the skittering beats of “Courtship” and a repeating simplistic line across the beautiful “Tabula Rasa”.

“Features Creatures” sounds like a little-known lullaby, captured on futuristic equipment from an ancient civilisation. My favourite track from the set though is one placed near to the end of the track list. “Claimstaker” is an extraordinary exploration of sound and rhythm, with the track’s backing largely made up of vocal sounds boop-booping in the background.  The closer “Future Forever is also worthy of note too, as gentle and delicate as anything I have heard Björk ever do.

14 tracks obviously hint at the fact that the singer and her collaborators enjoy working with each other, and more than this, are inspired by each other. This is a long album, but no track seems superfluous – I would even go as far as to say there are very few sounds in the tracks which could have been removed. Even a track like “Body Memory” which sits in at nearly 10 minutes long doesn’t outstay its welcome. The album as a whole sounds organic and fluid thanks to the invention shown sonically.

Björk these days more than ever sits in a class of one. There is nobody who does anything like what she does, and has evolved as much as she has over her career. Though in many people’s eyes I may have ultimately been wrong in my last review of her work, I stand by what I said about that album, as I do with this one – this is an album of exemplary sounds, shapes and imagination. Björk has created another classic.