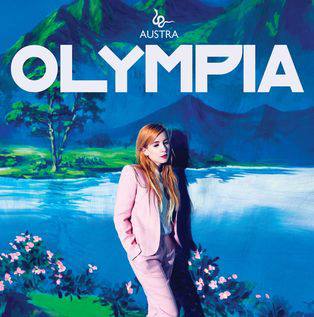 Austra’s debut 2011 album, “Feel It Break”, was a game-changer for me. Suddenly there was a band daring to push the boundaries and move away from the stale electropop climate that had been there for almost a decade.

Compared to their debut the brand new album “Olympia” sounds both familliar and different at the same time. Katie Stelmansis’ voice is still the focal point in the sonic palette and the mostly electronic orchestration is tailored to back up the harmonies of the actual singing.

The first album was a rather straight forward experience but with a twist since the Austra band members’ songwriting skills are miles ahead of most other electronic bands, generally speaking. On “Olympia” the quality of the songs are still top notch but this time Stelmansis handed over her songs in much more rough demo forms in order to maximize the rest of the band’s input. I’m not sure that this modus operandi actually is for the better. This might be the reason why the songs aren’t as mindblowing as last time. Sometimes the arrangements seem to be twisted around just for the sake of turning them into new directions.

On “Feel It Break” almost every track was love at first sight for me as a listener. Of course, I do understand their artistic ambitions and wishes for not repeating themselves. However, some of the edges and the oddities that I loved are now polished away. The band claim a dance and techno influence but since all their tracks are recorded live, with no programming or loops involved, their rendition of dance music is far more flexible and alive sounding than any overhyped Scandinavian house mob.

Maybe extensive touring with The XX, Grimes and Gossip has led the band on a more commercial path, trying to get the attention of the dance floor people with discrete house flirts. At times the sound is way too squashed, pushing the level too close to the digital 0 (the very maximum level of digital recording) and this doesn’t help the songs – quite the contrary. Austra’s originality deserves more than being boxed into a standard side chain compressor outfit. I reckon they’d use remixers for that purpose.

Don’t get me wrong; this album is still a very good one, displaying electronic pop music with an IQ above the average. I am just afraid that this might be one small step towards a standardisation of Austra – and that would be a shame because the world needs their musical expression as pure as possible.