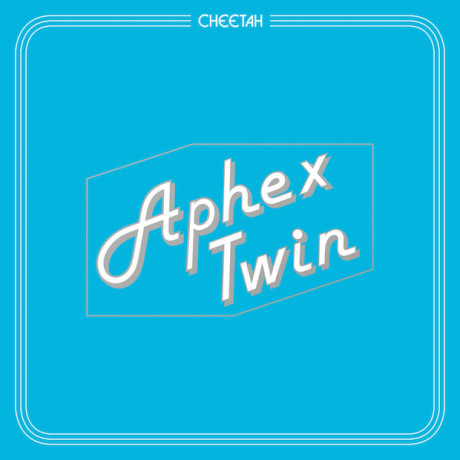 More tracks in the form of the “Cheetah” EP from the prolific Aphex Twin. It seems strange to these days call Richard D James prolific after such an abundant amount of time between albums, but since “Syro”, that’s all you can say of the man who has been chucking out tracks for fun over the last 24 months or so…

With artwork that hints at a dramatic departure from the grinning Twin faces, seemingly into Miami Vice soundtrack territory – it is reassuring to listen and hear those can-only-be-him melodies, in a slightly less frenetic form.

“CHEETAHT2 (Ld spectrum)” sees a midtempo pounding beat holding together a rather sparse soundscape –  it is like listening to the title track of a tv release 80:s sci-fi movie, the ones were everyone dresses in exactly the same silver tinfoil costumes. “CHEETAHT7b” sounds delightful on a good pair of headphones (I would love to hear it in a large room on surround sound), as it rolls across your ears like a bag of marbles being dropped on a wet snare drum. Again the tempo is quite slow, but all the better for it, as the atmospherics are allowed to take over from the trademark slippery beats. The interesting thing about this, the standout track here, is the quite sad melody development, there is something melancholy about the track, which provokes a slight sense of sadness.

“CHEETAH1b ms800″and “CHEETA2 ms800″ are nothing more than experiments, so not really worth commenting on, other than they show some of the qualities of the Cheetah synth, a rare piece of kit that Aphex Twin obviously used on these tracks. “CIRCLON3 (Kolkhoznaya mix)” is a different story. People may remember it from the now legendary Soundcloud file dump, but don’t think you are getting the same thing, as this has been lovingly unearthed, dusted off, and almost archeologically scrubbed up like new. Again, listen to it on something good, and you will appreciate the warmth of the keys, and the sharpness of the snare – this is pure Aphex funk, and though it isn’t my favourite here, it is very close (especially the last minute, where the track heads into more sinister territory).

Both “CIRKLON1″ and the final track “2X202-ST5″ are more beat-driven affairs, and have the snappiness of old school drum machines, with deeply satisfying basslines holding everything together. Again the sounds are rich and very analogue, something that very few computer software packages can ever hope to live up to.

All in all, a satisfying, if not stand out RDJ effort – with the Cheetah synth playing as much of a part as the efforts of the electronic wizard himself.