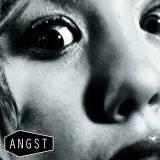 After the successful return of Swedish EBM veterans Pouppée Fabrikk and the intriguing first effort of Nexus Kenosis I was looking forward to Angst quite a bit. This new project from Henrik Björkk follows the Pouppée concept in theory, which is monotone analogue bass twirling above pretty basic rhythms with dark vocals on top. It’s got an even more old school DIY feeling to it though, with basslines going out of sync to the beat at times, especially in “Underbar” – yes the lyrics are in Swedish. Listening to old DAF songs and the weirder Nitzer Ebb moments might prepare you for this. Perhaps some old Klinik stuff too?

I have to say that this is really not my bag. To be honest, the vocals are pretty bad, with neither the aggression nor the emotion that we’re used to hear from Henrik, and the lyrics do not capture my imagination either. The music mostly lacks energy too, and not because it’s in a lower tempo, it’s because it doesn’t really grab on. It just sounds pretty dreary and claustrophobic. Which actually ties in pretty well with the moniker Angst, but I still don’t want to listen to it.