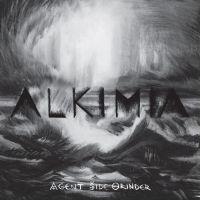 In case you haven’t heard of Agent Side Grinder, they’re a five man troupe comprised of Kristoffer Grip, Johan Lange, Henrik Sunbring, Peter Fristedt och Thobias Eidevald from Bromma outside of Stockholm. They impressed the alternative music scene in Sweden with their previous album ”Hardware” and got a bunch of great reviews (except here at Release…), and won the best ”synth” at the annual Manifest Awards. Now three years later they’re back with the follow-up ”Alkimia” and luckily they’ve managed to live up to the expectations and created a tremendous album that is an improvement in every way.

The sound is that of a modern Joy Division who’s discovered analogue synthesizers and industrial while developing their pop sensibilities, however contradictory that may seem. Agent Side Grinder creates drama, but not via chaos and big gestures; no, it’s rather the opposite. They have a knack for the monotone and restrained, choosing to create pulsating and hypnotic minimalistic music that they sprinkle with small, well placed synthesizer melodies and electronic atmosphere. The stark, brooding vocals by Kristoffer Grip and Thobias Eidevald’s electric bass guitar cement the foundation that everything else rests on. The band has continued building on the style of their previous efforts, but refined it into something beautiful, although perhaps removing some of the rawness that was apparent in the older material.

The opener ”Into the Wild” jumps right out of the box but ”Alkimia” really hits its stride on the third song ”Giants Fall” – pop perfection by the way – and then just keep bringing out complete belters until the album sadly ends. Do you want slow and ethereal? Just listen to ”Void (The Winning Hand)” and dream away. Want cold, fast and menacing? Put ”Hexagon” on and feel the brutal energy surround you. Each and every track has a distinctive personality and tone.

If all was right in the world, Agent Side Grinder wouldn’t just light up the Swedish alternative scene, but the rest of the world too. ”Alkimia” is a monumental achievement and is an album of the year contender already.