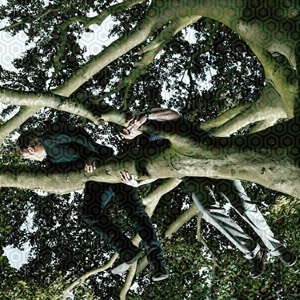 2kilos &More are a duo from Paris who record cinematic experimental electronic music on the Ant-Zen label. The pair often utilise the talents of spoken word artist Black Sifichi to create their soundscapes.

This album, the latest in their ten-years of working together, could best be described as intense. Listen to the creeping paranoia that is the opening track “apres tout” – just a squeak short of ten minutes in length, and half of that is taken up by layer upon layer of noise, feedback, guitar and IDM drum beats. They are not all like this though, and a variety of styles, form experimental electronica to nearly rock-trance hybrids can be heard across the set, making for a varied listening experience.

Their music is very cinematic, something they agree with themselves, and the tracks where Black Sifichi features take on this aspect even more. It is these tracks I perhaps like the most, especially “only hazardous”, as the aural pictures painted by the New York wordsmith enhance, and even make sense of the duo’s output.

“autres peaux” is a very interesting mixture of IDM and rock music, as though Autechre were jamming with Nirvana or similar. It’s an interesting track, but it does feel like two separate entities are trying too hard to get along, like parents and in-laws at a wedding.

Sometimes I wish they would push up the tempo a little though, as the trance aspect can sometimes be too plodding. Take “cache feu” for example, which has the potential to be a nice track if only the tempo was increased by +10. “presque l + a” is a better example of the slower tempo working, as the track is very nearly ambient, apart from a scattering drum rhythm – an occasional voice sample making for a rather pleasant track.

Overall, a likeable album, which has its fair share of hits and misses, but enough experiments to keep it interesting through to the end – I for one will be keeping my out for them from now on…