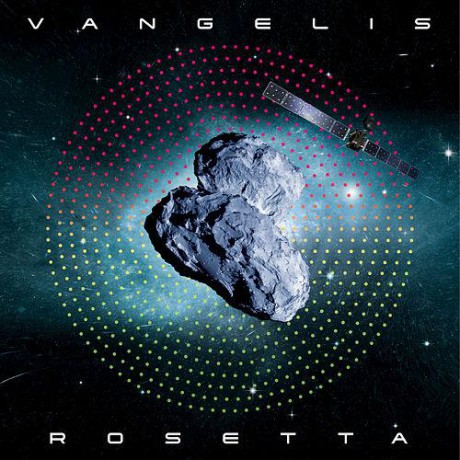 The year is 2016 and I am listening to a concept album, in this day and age this is out of the ordinary when most mainstream artists are judged, admired and dismissed based on the their latest single. But I don’t care much for mainstream.

Maestro Vangelis is back with and new studio album after a long hiatus and the concept for his album is the ESA (European Space Agency) mission Rosetta. For those of you who don’t know, the Rosetta mission was to study and land a probe on a comet, in this case 67P/Churyumov–Gerasimenko. The space probe Rosetta was launched in 2004 and reached the comet not 57 years but a decade later. The landing unit Philae was successful and the mission was deemed finished when the Rosetta probe itself also landed on the comet on September 30th this year. To coincide with the initial landing of Philea in late 2014, Vangelis wrote a piece especially to honor the ESA personnel and this developed into an entire album released here at the end of the mission.

The album consists of 13 songs and follows the interesting space mission from launch to switching off the power and letting the comet carry the probe into the void of space. It is quite a demanding album; you can’t pick one random song and enjoy it, at least I can’t. The songs form a unit, a journey where all bits and pieces are essential to the experience. It has a soundtrack feel and my only regret is that there is no film to go with it, at least not yet. Online there are short sequences from the recording of some tracks and in the background there are movie sequences from the mission, for inspiration I guess. The Rosetta mission cost was around a billion Euro and it would be a shame if some money wasn’t put aside to make a movie of the sequences to match the album, heck I could do it if they sent me the material (and a bag of money). Because the album deserves it.

I love the work of Vangelis, my favorite movie is Blade Runner and just after midnight on New Year’s Eve 1999, when “Conquest of Paradise” was blasted along with the fireworks in central Gothenburg a tear or two fell and were lost in the rain. More tears were lost while walking and listening to “Rosetta”.

So what does it sound like then? Well, it is quite diverse, within the realm of Vangelis at least. Already the first song “Origins (Arrival)” has all the Vangelis trademarks: Looming bombastic strings, a fluttering and glittering arpeggio or two, a strong melody, almost haunting space wind and a longing feeling of the adventure awaiting. This is followed by choirs, chimes and more good things which merge seamlessly into the travel part of the journey – slower, waiting, sleeping.

The theme of “Infinitude” is really great, although the first time I listened to it, for some reason it reminded me of the Soft Kitty song from the TV show The Big Bang Theory but in minor keys. The album picks up the pace in “Exo Genesis”. The listener is asked the question from where life on Earth was created. Was it from visiting aliens perhaps? The melodic part and orchestral hits give me visions of sunrise and the glittering lead in “Celestial Whispers” moves you along with the “Forever Young”-like organs to the most non typical track of the lot: “Albedo 0.06″, a reference to the reflection of a planets, where harsh arpeggios again with variations of the theme give me Blade Runner visions, although glimpses of that already hit me at the end of “Starstuff”.

By now we have almost caught up with the comet and the song “Rosetta” is the culmination of the journey so far. The orchestral violin hits are almost more Enya sounding than Enya herself. A lone trumpet, horns battles with the plucky melody. Then it is time for the landing of the Philea module and the theme is back, laced with glittering chimes and timpani. Success, and the ESA personell accolade “Mission Accomplie (Rosetta’s Waltz)”. The track “Perihelion” is like the “Blade Runner – End Titles” track of this album. It’s the highlight of and the end of the journey where the final energy is spent with an energetic octave base and a conclusion that the journey must come to an end, the batteries have run out. An end described in “Elegy” and “Return to the Void”. To infinity and beyond.

There are no obvious “hits” on the album, like “Chariots of Fire”, “Blade Runner – End Titles” or “Conquest of Paradise”, and if I had to choose my favorites it would take some persuasion for me to say “Infinitude”, “Mission Accomplie (Rosetta’s Waltz)” and “Perihelion”. I love the album more than the individual tracks. Please make the film, the soundtrack is finished and it is glorious.