Nivek Ogre has the strangest voice I have heard. In Skinny Puppy, he shot deadly doses of heroin and screamed, whispered and sang the most beautiful, fragmented and weird poetry one could imagine. In recent years he has tried out new ground in projects like Rx and Ohgr.
We called him up in Los Angeles to find out more about this overgrown teenager and industrial music celebrity. While talking we find out that, "eight non-human creatures" stare at him. "I guess I spend more time than I should with my animals, as I'm sure you can tell from this conversation", he says.
This is an updated and translated version of a 1998 feature in the printed Release. It was meant as one of the top stories for issue 2/98, the issue that later became 1/99, but ultimately never saw the light of day... Most of that issue was ready to print, and so was this feature. Now we start to work our way through all those unpublished texts. Noone has read them and that is indeed a shame, since we, if we may say so, are quite proud of that very issue that never got printed. 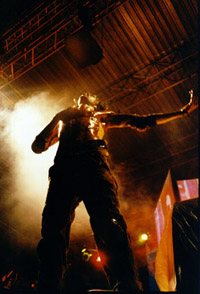 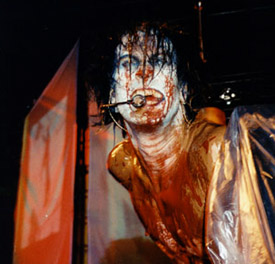 Death and misery
It's been a couple of years since Skinny Puppy's career collapsed in one of the most horrible endings in the history of modern music. Death, misery and turnings worse than your average soap opera flocked like flies around the last breaths of the malnutritioned little dog. A more than tragic end to one of the most influential bands in contemporary electronic music.
Nivek Ogre and Cevin Key walked out as survivors, and seem to have recovered. Key has released a handful of albums under a row of different aliases, and Ogre has delivered albums under the names Rx and Ohgr. Of course, we all know about the 2000 reunion show in Germany and its live release.
Furthermore, Key has performed with Ohgr on stage and Ogre is featured on Key's latest solo album. Key and Ogre are also about to pick up their creations with Genesis P-Orridge. A future for the Skinny Puppy saga is possible.

A W.E.L.T. of confusion
At the time of my interview, autumn 1998, Rx' "Bedside Toxicology" had just been released. Ogre's partner in that band was Martin Atkins, the driving force behind Pigface and Invisible Records, and former drummer with Public Image Ltd and Killing Joke, to name but a few. But the choice of musical aid doesn't seem to have sprung from any deep concerns.
- Why I chose to work with Martin? Because he is a good friend, says Ogre, trying to hold back a bubbling laughter. I'm laughing because people always make that conclusion - they assume that you work with someone because of their technical skills. But to me it's more about friendship. Ever since Skinny Puppy split up, I've chosen to work with people I like.
But surely the musician's skills must have some place in it?
- The result comes from the personal chemistry. Friendship is most important, and the technical aspects come second. I didn't chose to work with Martin Atkins because he's good at looping drums, Ogre laughs with slight contempt.
In his next breath, he goes on to tell me about the project that was then called W.E.L.T., and later got renamed Ohgr. There, he collaborates with Mark Walk (Pigface, Ruby), and claims that has to do with Walk's musical talents. When I point out that he thereby contradicts himself, he just keeps on laughing. 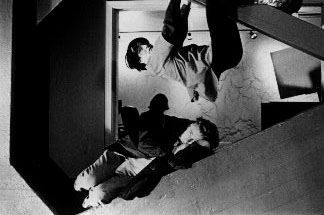 Ogre hanging out in Rx (Ritalin).

On a pedestal next to The Beach Boys
Rx have a three album contract, but Ogre isn't sure if there's ever going to be anything else done under that moniker, since he thinks that they achieved everything they were striving for with "Bedside Toxicology". But the proper confusion starts when he's telling me about the Ohgr plans. The "Welt" album was apparently supposed to have been released in on American Recordings in 1996, but in the mess surrounding Skinny Puppy's "The Process", it got stuck somewhere in the record label labyrinths. So when I spoke to Ogre, he claimed to be working on Ohgr album number two
- Sixteen tracks were recorded and finished, but they're somewhere in American's archives. To deal with those recordings now would be horrible, 'cause there were so many emotional things going on that no one knows about. I've already been through that once, so I couldn't cope with going through that material again, and having to experience it all over again. So we started on a new album instead.
The first album will be your version of The Beach Boys' "Smile" that's been locked into the vaults for thirty years
- Yeah, who knows what's going to happen, Ogre grins and bursts out laughing again. Sorry, I just tried to place myself on a pedestal next to The Beach Boys, so I had to laugh.
I guess that only Ogre knows what then happened with the second album he mentions here. But considering that he initiated the W.E.L.T./Ohgr project back in 1988 or so, but didn't get around to release anything until 13 years later, perhaps we should not be too surprised if everything's not crystal clear. Anyway, we hear that a second album is ready to be mixed.

Remix dementia in 1998
In October of 1998, Skinny Puppy's old label Nettwerk released "Remix Dystemper", a record where artists like Adrian Sherwood, Autechre, Rhys Fulber and KMFDM:s Günter Schulz had been allowed to reconstruct several Skinny Puppy classics. Ogre and Mark Walk remixed "Smothered Hope", but Ogre left most of the business to the label.
- I suggested Autechre and KMFDM, but I've retained a passive role regarding the rest of it. I've heard the remixes as they've been done, and although I wasn't really content with all of them, I didn't see much point in trying to censor anyone's interpretations. Parts of the album is actually quite close to what a new Skinny Puppy album could sound like - the mixture of total chaos and melodies, almost pop song structure, is something we've always been close to.
Things have obviously changed since this was first written, but speaking about a possible Skinny Puppy reunion, Ogre had the following to say:
- I find it hard to imagine us getting back together, partly since Dwayne is gone. When he joined us we gained a band feeling that we didn't have before. Bill Leeb was a funny character, but he never took part in quite the same way. To go back to the core of this conversation, he wasn't a musician of the same caliber as Dwayne, Ogre says very sarcastically. Besides that, I'm also on a certain path that I want to follow for the moment, and to collaborate with Cevin wouldn't fit in there.

Collaborating for profit?
But Ogre hasn't been opposed to making guest appearances here and there. He has contributed to several Pigface albums, and on KMFDM:s "Symbols" and the American leg of their 1997 tour. Earlier in the autumn of 1998 he flew up to Seattle to record vocals for what turned out to be KMFDM: faux farewell album, "Adios". But my hopes of getting a thought through answer about his opinions on KMFDM:s propaganda like, political music soon got shattered.
- I've known them for a long time, and they're good people, good to work with. I guess what's behind all this is a wish to do something together and make some money from all this shit, Ogre giggles. And like I said, I enjoy working with people who treat me well.
Do you have a lot in common ideologically?
- I couldn't even begin to understand what KMFDM:s ideology is, or what they try and achieve with their music. I mean, I know where Sascha stands, but about KMFDM no, no, I won't try to analyze KMFDM today!

Lyrical wonders
One of the reasons why Skinny Puppy have made such an impression on so many people isn't just their groundbreaking sound collages, that found their nutrition in everything from old school industrial and krautrock to hip hop and Ministry. Nivek Ogre's vocals, that turned from fragile whispers to tortured growls, not to mention his lyrics, have probably meant just as much.
His menacing, fractured stream-of-consciousness poetry often, especially in combination with the spooky music, became a perfect depiction of a sick, media controlled world, and the biggest reason that Skinny Puppy penetrate the listener's ears as easily as his heart.
Post Puppy, his text writing seems to have changed a bit, and become more direct. Ogre starts a completely incomprehensible rant about how he started to question who he is, to, after having circled around cosmos, landed and become the person he is today.
- But sure, the lyrics have become a bit more direct. I've tried to write more general lyrics.
Animal rights don't seem to occur as often in them anymore.
- I'm just as engaged in animal rights nowadays, Ogre says. But as soon as you bring it up, someone starts moaning about how you should fight for human rights instead. But I spend a lot of time helping animals. I've got seven, no, eight non-human creatures in the room. Ah, you're all staring at me, aren't you? he says out into the room with a bedlam laughter. I guess I spend more time than I should with my animals, as I'm sure you can tell from this conversation

A joker in the machine
That Skinny Puppy was a conflict-ridden band, with an Ogre on a perpetual quest for more heroin, is long since well-known. But the Ogre I was talking to seemed to differ remarkably from the blood-drenched maniac who stumbles around in the live video "Ain't It Dead Yet?" and crucifies dolls. As you can probably tell from this interview, he doesn't appear to be fully sane, but seems more harmonic than during the old Skinny Puppy years.
Talking to Ogre is not at all like I, perhaps naively, would have imagined it to be. He doesn't seem to take anything seriously and laughs his way through the entire interview, often for reasons beyond my understanding. He claims he hates all of mankind, but still only seems to have good things to say about every individual he's ever met. His behaviour isn't unlikely to stem from his massive drug consumption.
- I'm stuck in my teens from all the drugs, he claims. As you've probably noticed, I'm not fully adjusted to ordinary social life. I've always been a prankster, who's said what I think.
Does it ever bother you?
- No, why should it? I could be polite and to the point if I wanted to, but I've found a youthful spark inside myself, that I thought had vanished. And I'm very grateful that it's still there after everything I've gone through. So I enjoy it as much as I can.

Note: A huge Skinny Puppy feature, based upon a Cevin Key interview, can be found in the printed Release edition 1/96.