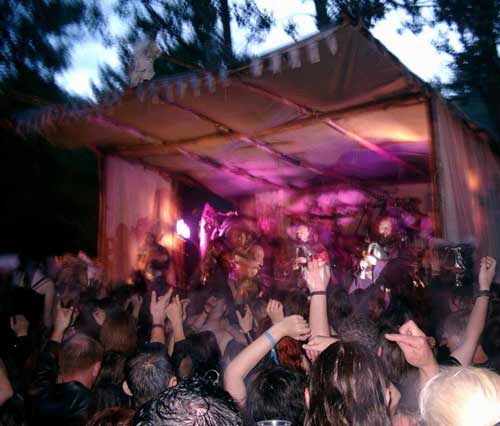 Talk about heavy line-up with nearly 150 artists performing during four days on eight different stages. Add two nice mediveal villages, role-playing games, DJ-wars, gothic shopping and the usual dress code of velvet wedding dresses, latex strings and so on - and you will get quite an experience. Together with 20 000 other goth-industrial friends from all over the world. What more can you expect to meet in the heaven of goths..? 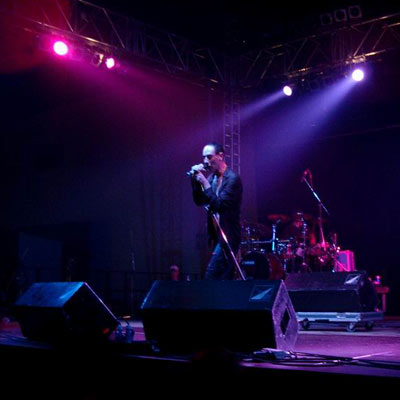 All light on Gabi.

DAF had the honour to enter the main WGT-stage on prime time the first day of the festival. The audience did not get to hear the band's latest hit “Der Sheriff”, although they played both “Der Mussolini” and “Alle gegen Alle”. Twice. The two Mexicans in Dulce Liquido did a far better gig on the main stage earlier the same evening. As long as they kept far away from the microphone, it was a really nice and powerful experience. The songs with lyrics weren’t bad either, but they sounded similar to the two band-members other project, Hocico.
Laibach, who entered the same stage the day after, had more or less the same track-list as they had in Arvika three years ago. So, for us who likes the "Nato" album it was a great pleasure to see the show. But it was not what it used to be in the good old days, although the lead-singer still has a lot of character. The question that was raised among the audience was why Laibach choose not to play one single song from their upcoming album. Maybe they saved those songs for their upcoming gigs, like at Electric Gathering in Stockholm in August? 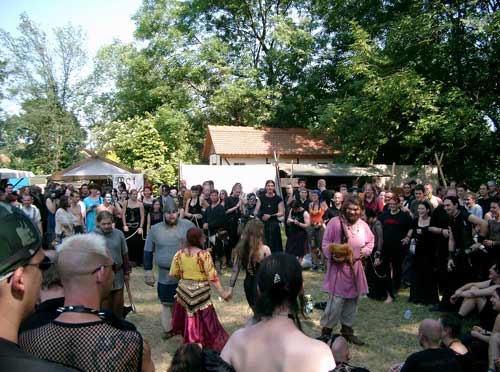 Laughing grufties looking at a performance in a medieval village.

Two other bands that are joining the Electric Gathering in Stockholm did perform at the WGT as well: The Invincible Spirit and The Fair Sex. They both did really strong gigs, although the audience was a bit disappointed when Fair Sex’s “Naked and the dead” was not on the playlist. Unfortunately the sound was crappy, so it is good they are playing soon again, because the performance was great!
One of the main attractions for this year's WGT was the German duo Deine Lakaien, who despite of the far too large concert hall - though filled until the last millimeter - was quite an experience. Most of the songs that were played came from the group’s latest album ”White Lies”, released in 2002. With back up from one violin, one viola, cello, piano and synthesizers, Alexander Veljanov really managed to spellbind the audience with his dark, sad voice and melancholic lyrics.
The best surprise experience was without doubt the German neofolk band Qntal. They managed to make a brilliant gig - even without a proper soundcheck. The experience was strengthened by the fact that the concert was held in Leipzig’s city theatre with red velvet seats and real good acoustics.
Among the many other bands that visited the festival one could also find many artists from the Cold Meat Industry stable, a bunch of future-pop bands like Assemblage 23 and VNV Nation (see the SAMA review). One of the brightest stars on that sky was the German band E-craft who actually managed to create more than just hard beats. Industrial-lovers could move their heads on Saturday night to as well Dive and Klinik as to Noisex and Vomito Negro. Another appreciated gig was Fire+Ice, featuring Ian Read with a history from Current 93, Death In June and Sol Invictus.
To sum up, I can say I’ve never been at Wave Gotik Treffen before, but I definitely wish I had been and I look forward to return.