Roskilde Festival '00, Denmark - June 29 - July 2
The 30th edition of the Roskilde Festival will forever be remembered for one immensely tragic incident. As you all know by now nine people were crushed to death in front of the orange stage during a Pearl Jam concert. It's still almost incomprehensible. Nine young men lost their lives because of their wish to see their favourite band perform. Because they wanted to have a good time.
The pictures of a devastated Eddie Vedder trying to get the audience to back off says it all. We all felt equally powerless, confronted with such an utterly meaningless accident. The Cure, who was to play directly after Pearl Jam, are supposed to have smashed their dressing room in frustration over what had happened. And I totally understand them. But at that moment there was nothing to be done but await the rising death rates.
I see no point in looking for single scapegoats. There are too many factors involved to lay the responsibility on one specific person or group. But to avoid future incidents of these proportions, the security must of course be thoroughly looked into, but the most ruthless parts of the audience (you know who you are) should also reflect upon what their behaviour actually can lead to.
Some things could however been handled more carefully by the Roskilde management. Official statements regarding the accident were stained by an almost desperate need to put the blame on external factors and lacked a necessary amount of humbleness and self-examination. 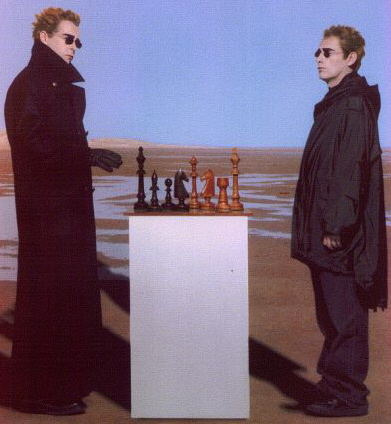 The decision to not close down the orange stage was also very unwise. Oasis, Pet Shop Boys and Live refused to perform and was because of this called traitors and disrespectful by the organisers. I thought that mourning, at least in my part of the world, was strongly associated with tranquillity and not with a huge salsa party, which was the absurd replacement of Oasis and Pet Shop Boys. I'd say that it's pretty obvious who has a shortage of respect. But the show went on and musically had several bright moments. On day one Nine Inch Nails, dressed in black leather and with white-powdered faces, made a short but extremely explosive performance. Old classics like "Head Like a Hole", "Sin" and "Gave Up" set the tempo beyond the most demanding aerobic exercise and at the end of the show had the audience on their knees.
Later the same evening, in sharp contrast to NIN's exhausting event, American singer-songwriter Bill Callahan, alias Smog, filled the white stage with mantra-like melancholy. A great concert despite an unfortunate collision with a very loud Iron Maiden. Underworld have always had a reputation of being a very good live act and I can't do anything but agree after their performance at Roskilde.
But the undisputed high-light of the festival was a small and very charming Canadian guy called Kid Koala. This down-right supernatural scratcher (of course from the Ninja Tune label) simultaneously handled four turntables and with this created the most fantastic jazz/funk/hip hop rhythms. If you ever get a chance to see him in action and don't take it, you'd actually commit a crime. Other acts worth mentioning are The Flaming Lips, Fu-Manchu spin-off band Nebula and Gomez.
However, all these musical experiences will of course always be overshadowed by an accident that no one thought was possible. The Roskilde Festival is scarred for life and coming back will never be the same.