Atari Teenage Riot + Nine Inch Nails, KB Hallen, Copenhagen, Denmark – November 23, 1999
As Nine Inch Nails finally blessed the Scandinavian ground with an appearance, the high expectations of many starved fans seem hard to overestimate. Years of waiting had come to an end and it was time to find out how the band managed a transition to the stage. 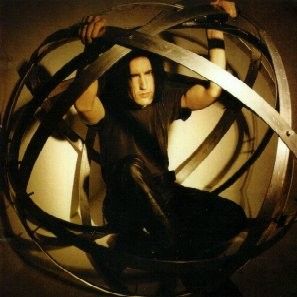 As always, opening act Atari Teenage Riot baffled the audience with their punk-driven drum'n'bass. Truly anti-commercial kick-ass music that is more about making a political statement, than producing a dynamic audible experience. Interesting, but perhaps somewhat tiresome, as the BPM rates increased beyond tolerable levels. Also - respect to front man Alec Empire for a daring stage-dive into a mildly amused crowd.

But of course, the night solely belonged to Trent Reznor and Nine Inch Nails. After the instrumental "Pinion", hell broke loose as the black curtain fell and the band finally could be seen. Reznor, wearing a brown leather jacket, attacking the mike with sparse lyrics from the brutal "Somewhat Damaged". Full of nuances, the sound seems close to perfect - you can for once hear every single syllable that is sung.

The following two songs, oldies "Terrible Lie" and "Sin", had been freshened up and adjusted to the NIN-sound of the late nineties.

The set list was generally surprisingly nostalgic - seven songs from the first two albums "Pretty Hate Machine" and "Broken". But it was foremost these songs (to my personal disappointment) that got the otherwise amazingly lame crowd going. You really could expect a lot more enthusiasm when such an act pays a first visit to your part of the world. The disappointment was also reflected in the band's rather held back performance. Not a single item was smashed on stage during the entire show…

The gig continued with an extended version of "March of the Pigs" and the gorgeously drum-driven "Piggy". Otherwise, the new material from "The Fragile" works brilliantly live. This is certainly the case with "The Wretched"; one of the best songs of the new album. The frenzy of "No You Don't" and "Gave Up" ended the first part of the show and made way for a more ambient section.

A transparent curtain, working as a screen, covered the stage on which mesmerising visual effects, created by Coil´s Peter Christopherson, were shown. This cinematic experience was accompanied by instrumental songs like "La Mer" and "The Way out Is Through" but also undoubtedly heightened by the stunningly beautiful "The Great Below". A clever detail with this part was that the band, throughout this section, were visible behind the screen.

"Wish" took the show back to the ball-breaking areas. This was momentarily interrupted by the paradoxical sexiness of "Into the Void", but soon resumed by the nostalgia of "Down in It" and good old "Head Like a Hole".

After a short break the band was ready for the final, and also best, part of the show. The extended version of "The Day the World Went Away" was one of the evening’s absolute high-lights. Halfways it just took a completely different and funkier direction that made, at least me, pleasantly surprised. The same could occasionally be said about "Closer". It just sounded a lot more raw and brutish than on record and was also extended to a mantra-like state. Totally awesome. The show ended in a majestically manor with one of Reznor's best songs, "Hurt".

To sum it up: An absolutely great performance of a band that deserved a lot more appreciation than they were given.