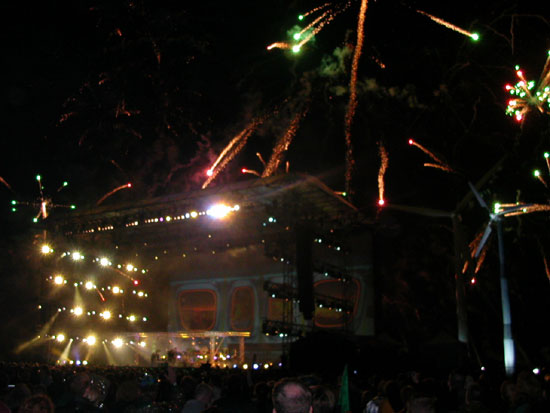 The 36x18 meter scene with the 160 tonnes back wall and one of the many wind mills at the right. Jean Michel Jarre in a cage surrounded by camera men.

Jean Michel Jarre just celebrated his 54th birthday and for some artists that is old. But Jarre is at it again. We Scandinavians are the first to applaud. Even if he has done indoor shows here in the past, he has never showed us one of his extravaganza super shows.
Throughout the years Jean Michel Jarre has done his best to come closer to god. He has successfully launched numerous "mission impossible" shows of a grand scale previously unheard of. But not even Jarre had the power to stop the skies from opening during his latest show, "Aero".
Even under perfect weather conditions, the 2,7 million dollar event "Aero" was a great challenge for the organisers. We all knew in advance, driving to and from the show site could take hours. 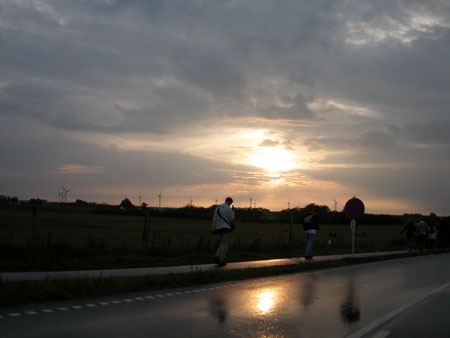 Walking towards the wind park.

The location, Gl Vrå Enge's wind park, can hardly be found on any maps. It is located in the absolute countryside north of the city of Aalborg in northern Denmark. For some reason, Jarre and his co-workers picked this very site. "Aero" was a show dedicated to the wind - in the world's pioneer wind power country - but surely there most be other suitable locations. It was an idea crazy enough for a man like Jarre and destined to grab the world's media attention once again. 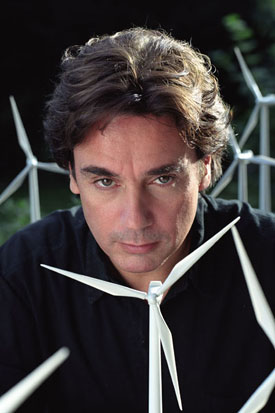 His latest gig, in April this year, was actually on a demo artist level. Just 100 people could watch his show in Bourges, France. But I figure, something like that catch the attention of people too. Just like when he released an album, "Music for Supermarkets", in one single copy.
Jarre rarely does anything average. It's either huge or tiny. In both cases he makes his statement.
"Aero" was sold-out four weeks after the tickets were released and the visitors came from 24 countries.The preparations for moving the show and 40 000 people to this wind park on minimal roads has occupied the organisers for many months and they had prepared themselves quite well after all. Closely to the show, they anticipated 4 mm of rain, but it soon became clear more was coming. 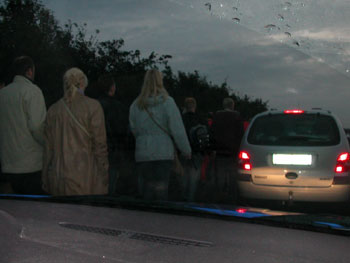 Endless lines of people and cars.

Driving on the farm roads, parking on the bumpy grass fields and even walking on the ground soon became a difficult task. Many thousand visitors couldn't reach the concert in time and others left the area before the show had started.
During Jarre's performance the skies opened once again and we all understood what was to come. A total of 22 mm rain fell and even a small amount was enough to turn the bare ground into a mud bath. I have experienced the Danish mud before on one of Roskilde's worst years a decade ago. But back then I camped and my tent collapsed into water and mud. This time "all" I had to do was to get the hell out of there. 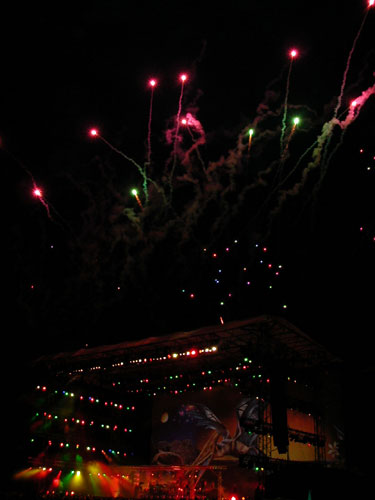 The police used the PA after the show and asked us to take it cool and expect many hours before we could reach or destinations. Just after two meters, our car got stuck in the mud at the press parking and so did cars everywhere. Towing cars and local farmers worked all night in the dark to help us. And the fields looked like a surreal war or catastrophe zone with military police, home guard and ambulances everywhere.
Finally, after five hours, we were on our way and the good thing was that by then, the long lines were gone.
No one got seriously hurt during the night and most people could experience a fantastic show. It was built to stand rain - and wind of course - and went as planned, but without fireworks in the last songs. 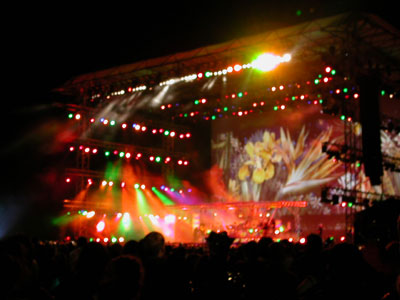 Jarre focused on his classic tunes, many of them successfully updated with heavy dance beats and more. In many cases, the sound was even more electrified and cool than on record.
He collaborated with among others a choir and popular Danish percussionists Safri Duo. In the end of the show Jarre and Safri Duo performed rhythmic pieces which leaned against the experimental and sometimes rave-like. Jarre also debuted new, fairly good "Aero" music. 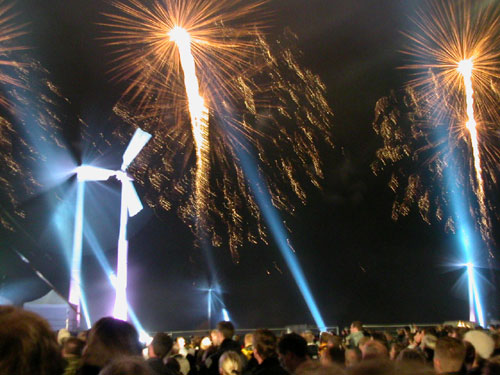 The sky is the limit.

Those who didn't enjoy the music, could keep themselves busy watching a constant flow of fireworks (five tonnes of powder), fire, light (1,7 million watts), confetti and back projections. Many songs featured expensive computer synchronised fireworks, often with a big bang finale in the end of the songs. Grown men cheered like small children. 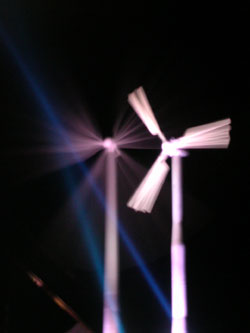 The fire cascades on stage were also impressive and of course the wind mills was lit up in different ways. Two cool big circle projection screens showed Jarre close-ups throughout the two hour show. They were placed behind people, opposite of the stage, so whenever I watched them I looked straight at the face of the people next to them. "Aero" was recorded for TV and will show up on channels world-wide in the near future. Watch it. 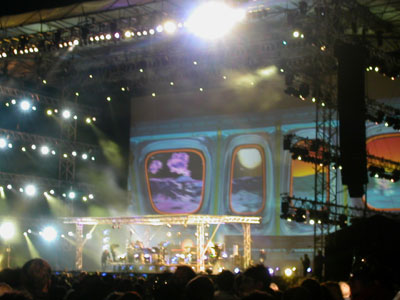 I think the stage was too lit up from time to time and some the backdrop projections ranged from fantastic to just quite cheap and boring. Jarre's talk in between songs sounded plain silly with the voice effects present and his poor English. I have no more negative comments. The fact, most of us forgot the weather during the show says it all. A once-in-a-lifetime experience to remember.