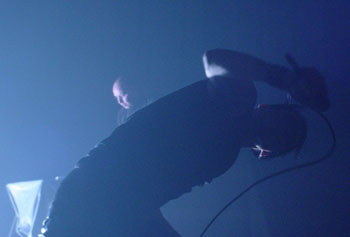 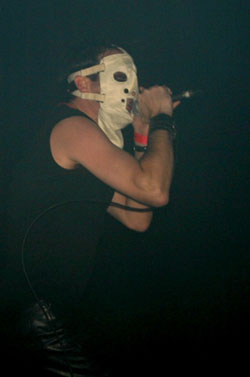 The festival started at 1 pm, but I think I will start this review with the last band on stage, The Klinik. After 14 years of not performing together, Dirk Ivens and Marc Verhaeghen did a fantastic concert. All songs were performed as in the good old days, and the track-list was nothing less than a hit parade for old Klinik-fans. Or what do you say about songs like “Go Back”, “Memories”, “Sick in Your Mind” and “Moving Hands”?
The only thing that was different from 14 years back was that Dirk Ivens got the stage on his own; Marc Verhaeghen had taken a step back and stood behind his synthesizers in the background the entire concert. Afterwards, I think that many people in the audience felt just as exalted as me, and the only negative thing I have to say about the gig is that it felt to short.
Another really strong concert was with another reunion between Eric van Wonterghem and Mario Varewijck in Insekt, another cult-band that was active between 1987-94. Although the songs were modernized and the connections to the two band-members' later involvement in other projects such as Monolith and Sonar came through, their performance was impressive. On the other hand – a set of drums on the stage can never be wrong and usually adds some extra energy to a gig.
Another band performing at the festival worth mentioning was the electronic and trancy band This Morn’ Omnia. I have seen them a couple of times before, and although the scene-show is nothing to hang in the Christmas tree, the music really reaches all the way into your heart. A plus: I got to hear my favourite song “One Eyed Man”. 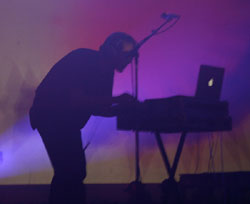 - Can someone please turn on the lights?

The concert with Male or Female was more of a disappointment though. The music, which sounded just as “new” Front 242 but with guitar and less vocals, was too slow to dance to and to tell from the thin audience, many of the visitors were of the same opinion. 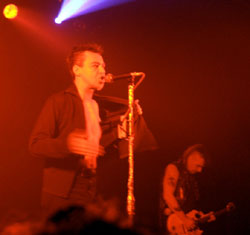 Other bands performing were Snowy Red, who caught the opportunity to get a new kick-off after almost 14 years of absence. Although the singer Micky Mike has a good and personal voice, the songs were boring and sounded the same all the time. In that case, Stin Scatzor with the lead singer Stefan Bens and guitarist Kris Peeters, who plays a music that can be placed somewhere between Feindflug and Suicide Commando but with more energetic vocals, did a far better impression.
Among the smaller bands performing during the afternoon I found the future techno band Foochow, the electro/darkwave-band Hedra Helix, the electro-rock band Foetal Void and FeaTuRe, alias Raf Hegge, who delivers harsh and noisy sounds.
I dare to say that most of the 1 200 visitors left the festival with a lyrical feeling from having seen a legendary-to-be and exclusive show with one of the most important innovators of the EBM-scene. At least I did.