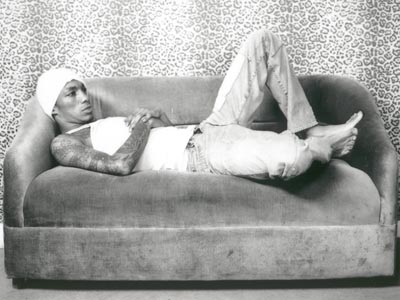 Tricky's Arvika gig took place in the middle of his celebrated comeback.
Photo by: Hollywood Records

Will Self's novel "Great Apes" is a hilarious depiction of apes that live like humans: they wear suits, have jobs and drive cars. But they still have ape habits, and going to a rock festival often feels more like stepping into that book than one may wish. People drink themselves senseless, mate like it's the last days on earth, and it's hard to draw the line between primal and primate.
"Like chimpansees" was the most often recurring thought in my head during this year's Arvika Festival. But a little hedonism is always pleasant, so the only thing to do is kick back and enjoy the ride. The town of Arvika seems to be cursed by our evil God when it comes to the weather, but thankfully, the place didn't resort to become the mud fest it was last year.
And there's always the music. The Sisters of Mercy were the first band of the festival for me, and I was pleased to see that Andrew Eldritch is still the same arrogant Prince of Smugness he's always been. The Sisters roared through a set consisting of a large portion of new songs - "We Are the Same Suzanne" is an instant favourite - but also revisited old songs like "On the Wire", "Dominion" and a rendition of "Something Fast" that managed to go straight into even the hardened heart of yours truly. "Temple of Love" was surprisingly lame, but Eldritch made up for that with an absolutely fantastic cover of The Ramones' pill classic "I Wanna Be Sedated". A hilarious mockery of his own goth status, as well as a much-deserved nod of respect to the tragically deceased Joey Ramone. Hey ho, let's goth! 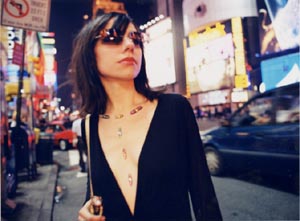 P J Harvey was if nothing else very loud. Which gave the songs from her tame last album a much needed raw edge, and suited her manic stage presence. Shortly after that, Sweden's currently coolest and best band Silverbullit went through a lightning bolt of a live show. The band is incredibly tight, and the songs from their recent "Citizen Bird" album were a rock'n'rollercoaster through damaged minds, Suicide and The Stooges' "Raw Power". "I Love You" was so vitriolic that even Trent Reznor should be envious. After that The Orb felt reasonably unengaging, even though their slo-funk and heavy dub did sound better than expected.

Saturday offered three big names in a row: Gary Numan, The Young Gods and Tricky. Numan strutted around just as cocky as the last time I saw him perform, but his show never really took off. Probably both due to the daylight and the fact that he mostly played songs from his last album "Pure", which were good but not really catchy.
The Young Gods on the other hand managed to run me over yet another time. "Skinflowers" and "Envoye" sounded like freight trains accelerating straight into the future and made every muscle in my worn out body twitch, while the newer, more technoid material transcended way above its studio counterparts.
Finishing the festival off for me, Tricky's show was just as schizophrenic as his recorded output. His live band went through funk, world music vibes, metal riffing, the splendid Public Enemy cover "Black Steel in the Hour of Chaos", ragga and much more. It would all had been good if it wasn't for two things: Tricky's unhealthy obsession with the more horrid parts of American alternative rock, and his band's tendencies to let the songs go on for a couple of extra, unnecessary minutes. But still: a good ending to a yet another enjoyable Arvika Festival.
And that the highlight this year was listening to The Velvet Underground's "Heroin" whilst finishing off one of that day's beers in the camping area is completely in order.